Six Weeks in Spring: Managing Protest at a Public University

For six weeks during the spring of 1985 UC Berkeley saw huge protests by thousands pushing for University of California divestment of financial holdings in companies doing business with South Africa. In these interviews, Chancellor Heyman and many of his staff tell how the campus administration handled the anti-apartheid sit-ins, sleep-ins, and other forms of protest that took place during April and May of 1985.

Special thanks to volunteers Mary Lavender and Mark Westlye for their extensive work in helping bring this project online. 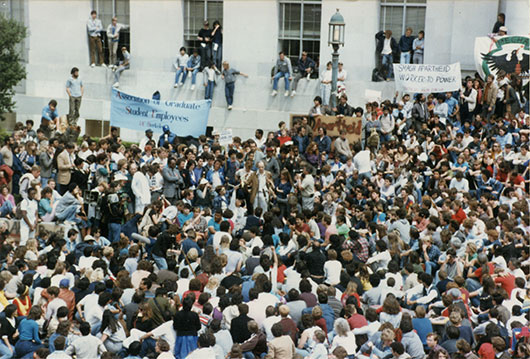 When the University of California decided in Spring 1985 not to divest itself of investments in South Africa, a nation whose segregationist apartheid policy had long drawn criticism worldwide, significant on-campus protests at UC Berkeley were an immediate result.

Divestment of South African holdings had been advocated since the 1960s as a means of protest against apartheid, but divestment as a means of sanction did not take hold until the mid-1980s. The push for US divestment had gained critical mass following the 1983 uprising of South African blacks against the country’s new Constitution. In 1985 black South Africans rejected the policy of apartheid and mobilized to make townships ungovernable. So many black local officials left their posts that the national government was forced to declare a state of emergency. Thousands of South African troups were deployed to put down the resistance, bringing further world criticism of South Africa. 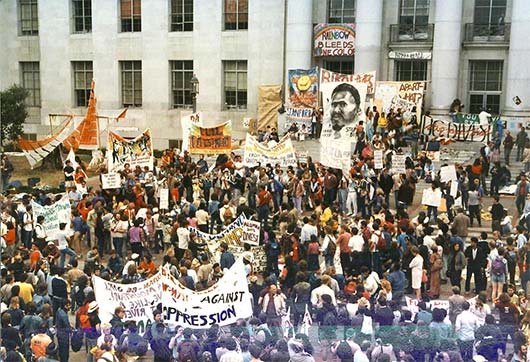 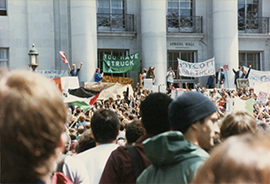 Organized divestment campaigns had already led the boards of trustees of several leading American universities to sever their ties with corporations doing business in South Africa. The UC Berkeley demonstrations of 1985 called upon the America’s premier public university to do the same. On April 10, two student groups, the UC Divestment Committee and the Campaign Against Apartheid, began mounting daily rallies on Sproul Plaza. Throughout that week, students and community members continued their sit-in. Many students camped overnight, holding discussion groups on the problem of apartheid and screening films on the subject. The campaign intensified when, at 6:00 a.m. on the morning of April 16, campus police raided the sit-in, arresting 156 of the protestors. Demonstration leaders immediately called for a campus-wide boycott of classes the next day. Some faculty members and teaching assistants voiced support, saying they would not penalize students for missing class.

On April 17, the day after the mass arrests, thousands of Berkeley students did stage a boycott, and in the following days students held a series of noon-time rallies. Hundreds continued to spend their nights on the steps of Sproul Plaza. Some protestors blocked entrances to campus buildings, actively resisting arrest. Over the weeks, hundreds of students and community members were detained by police. 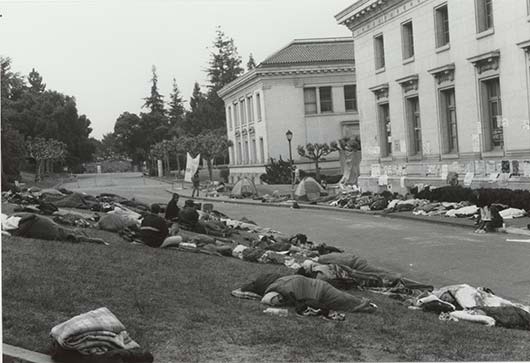 In 1986 the University of California did divest itself of $3 billion in South Africa-related stock holdings. The action was a statement heard loud and clear in South Africa. During a visit to the Bay Area after his 1990 release from 27 years in prison for his activism against apartheid, Nelson Mandela pointed to the UC Berkeley protests, and the University’s subsequent divestment, as a catalyst that ultimately helped end whites-only minority rule in his country. 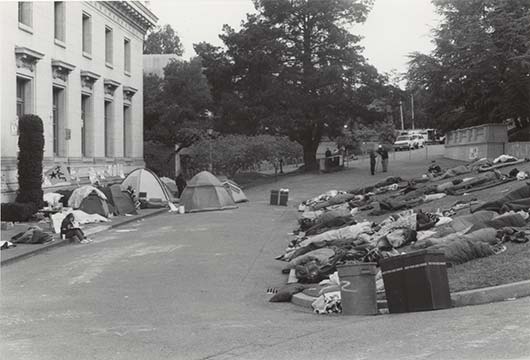