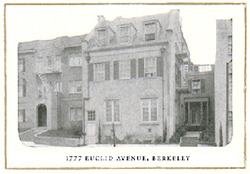 The Japanese American Confinement Sites / World War II American Home Front Oral History Project grew out of our long collaboration with the National Park Service on our broader Rosie the Riveter / World War II Home Front Oral History Project. This new group of oral history interviews was primarily funded by the Japanese American Confinement Sites Grant Program of the National Park Service. These interviews document the experiences of Japanese American students who attended UC Berkeley before or after being incarcerated during WWII. 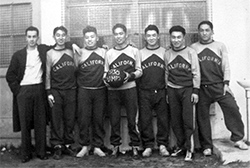 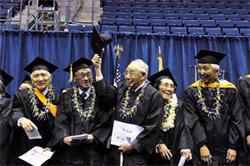 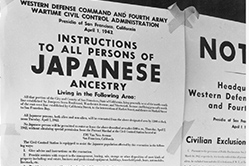 We were pleased to receive National Park Service JACS funding to complete oral history interviews with Japanese Americans, primarily those who attended UC Berkeley before--and in some cases after--incarceration during World War II. This coincided with The Bancroft Library's JACS grant to digitize and make available online the library’s extensive Japanese American incarceration materials, which have now become The Japanese American Evacuation and Resettlement Digital Archive. While we had some interviewee leads for this now elderly community, we immediately set about advertising our project on websites, newspapers, newsletters, radio, as well as networking with multiple UC Berkeley alumni organizations to recruit potential interviewees. We also received a donation of records from UC Berkeley's International House, which includes correspondence that fits alongside correspondence of University President Sproul and other university staff and academics who tried to allow for continued studies by Japanese American students, or to negotiate the transfer of students to other universities.

We soon learned that the Japanese American Women / Alumnae of UC Berkeley [JAWAUCB] conducted oral history interviews with individuals whose studies were interrupted by incarceration. From 2007-2011, Joyce Nao Takahashi and Mary Tomita of JAWAUCB headed their program to conduct audio interviews from the community. We met with Joyce and Mary to discuss our efforts, and to ensure their completed interviews could be donated to The Bancroft Library as part of our collection. 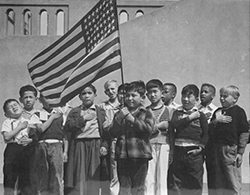 We also dialogued with the California Japanese American Alumni Association and other UC Berkeley alumni organizations to connect with living individuals who received honorary degrees in 2009. These efforts led us to a number of inspiring potential interviewees in their 80s and 90s. We informed potential candidates of our process and conducted a number of phone or in-person pre-interviews. From there we determined the best candidates for video recorded oral histories. Our final in-person video recorded oral history interviewees included several groups. As planned, we interviewed Japanese Americans who attended UC Berkeley before or after incarceration. Through colleagues at The Bancroft Library, we also met and interviewed two Deaf Japanese Americans--one who was incarcerated with her entire Deaf family--and one who was adopted by a California School for the Deaf teacher and avoided incarceration. Finally, we interviewed one woman whose family moved to Oklahoma to avoid incarceration, and later migrated during the war to Utah, where she and her family lived not far from Topaz camp where Japanese Americans like her were incarcerated. 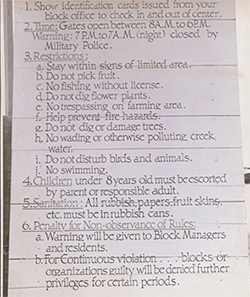 The majority of interviews were conducted at interviewees' homes or at The Bancroft Library. Most of the interviews were recorded in one or two sessions, ranging from one to four hours in total length. Most interviews included: family history and early years; attending UC Berkeley, especially those whose education was interrupted by incarceration; realities of incarceration for narrators and their families; transfer to universities in the Midwest or East Coast; and realities and challenges of post war re-entry into society. While some answers supported traditional literature on this history, many individual responses challenged the standard narratives, as can often happen with oral histories.

While we wish we had started sooner to more thoroughly document the experiences of Japanese American UC Berkeley students incarcerated during World War II, we are grateful to have found these unique individuals who generously shared their histories with us. This small collection adds to the overall collection of oral history interviews collection by Densho, the California Civil Liberties Public Education Program, and many others, some of which you can find on our Resources page. In coming years, we hope to work with other organizations to make all of the oral history interviews conducted on incarceration and the entire home front World War II experience more accessible, so these voices will continue to speak to scholars and students for centuries to come.

This material is based upon work assisted by a grant from the U.S. Department of the Interior, National Park Service. Any opinions, findings, and conclusions or recommendations expressed in this material are those of the author(s) and do not necessarily reflect the views of the U.S. Department of the Interior. This material received Federal financial assistance for the preservation and interpretation of U.S. confinement sites where Japanese Americans were detained during World War II.

Under Title VI of the Civil Rights Act of 1964, Section 504 of the Rehabilitation Act of 1973, and the Age Discrimination Act of 1975, as amended, the U.S. Department of the Interior prohibits discrimination on the basis of race, color, national origin, disability or age in its federally funded assisted projects. If you believe you have been discriminated against in any program, activity, or facility as described above, or if you desire further information, please write to:

Japanese Evacuation and Resettlement: A Digital Archive [The Bancroft Library]

Japanese American Internment and Relocation Records in the National Archives

Telling Their Stories by Urban School of San Francisco