The San Francisco-Oakland Bay Bridge Oral History Project tells the story of this engineering marvel. Enabling billions of passengers to drive from Oakland to San Francisco, or vice versa, since it opened to the public 1936, the Bay Bridge binds together the region like no other man-made structure. The majority of interviewees for this project spent their careers working on and around the bridge, and they offer their perspective on the engineering achievements, the maintenance challenges, and the complex symbolism of this massive structure. 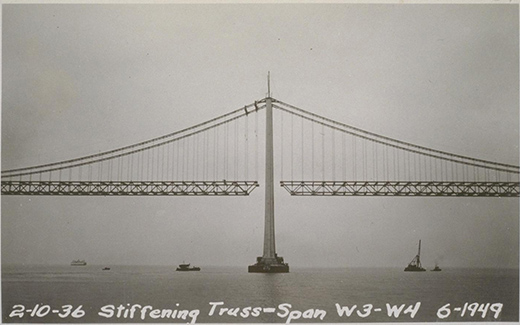 The Oral History Center, or OHC (then the Regional Oral History Office), of The Bancroft Library at the University of California Berkeley, launched a new oral history series on the history of the San Francisco-Oakland Bay Bridge in May 2012. At that time, OHC entered into an agreement with the Oakland Museum of California (OMCA) to conduct approximately 15 oral histories, totaling approximately 30 hours of interviews, on the history of the Bay Bridge, the San Francisco Bay, and bridges in the surrounding region.

This project was a collaboration between OHC, OMCA, the California Department of Transportation (Caltrans), the Bay Area Toll Authority (BATA), and the Metropolitan Transportation Commission (MTC). This project was designed to fulfill the historical mitigation requirements associated with the dismantling of the eastern span of the San Francisco-Oakland Bay Bridge. The series coincided with, and contributed to, the research phase and design phase of an exhibit at OMCA on the social and environmental history of the San Francisco Bay. 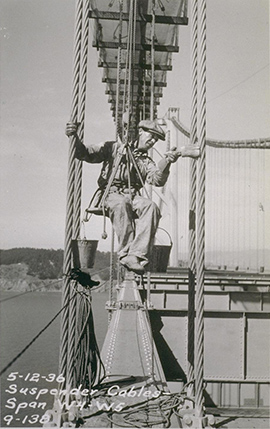 This project provides a set of resources widely accessible to students, scholars, and the public interested in the San Francisco Bay. Interviews focused on the men and women who spent a good portion of their careers working on the bridge, whether as painters or engineers, toll-takers or architects, labor or management. Beyond the human dimension of the bridges, these structures also connect geographic spaces, providing conceptual linkages between cultures, environments, and political discourses. This oral history project, then, explored the role of the iconic bridges in shaping the identity of the region, as well as their place in architectural, environmental, labor, and political history. This project enhances the historical understanding of the San Francisco Bay and the natural and built environment that helps define the region.

The Bay Bridge Oral History Project launched with an investigation of the history of the bay and the architectural, social, and political history of the bridges that span the waters of the region. Planning meetings attended by representatives of OHC, OMCA, Caltrans, BATA, and MTC began in mid-2011. In these meetings, representatives of the various groups discussed the topics that should be covered in the interviews as well as the kind of people who should be interviewed. Although there were no known individuals who worked on the construction of the Bay Bridge (1934-36) still living, a foremost goal of the project was to document the construction of the bridge and its early years, especially before the bridge was altered in 1959 with the removal of rail tracks on the lower deck. Beyond that initial goal, interviews were sought with individuals who would be able to share unique experiences related to the bridges from a variety of personal and professional vantage points: from laborers involved in maintenance of the bridge through bridge engineers who worked on the design on the new eastern span. The primary focus of this project was to dig deeper into the complex history of the San Francisco-Oakland Bay Bridge and its changing relationship to human communities and the environment.

Above and Below: Stories from Our Changing Bay
Exhibition at the Oakland Museum of California
August 31, 2013 – February 23, 2014

“Bay Area Woman, 99, Remembers the Before and After of the Bay Bridge Eastern Span”
by Joe Rosato Jr.
NBC Bay Area, August 29, 2013

“Above and Below: Stories From Our Changing Bay”
by Kimberly Chun
San Francisco Chronicle, September 18, 2013

“Oral History On and Above The Bay Bridge”
by Martin Meeker
Bancroftiana, Summer 2013 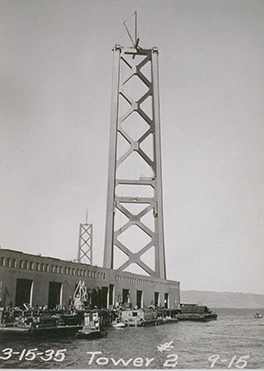