Agriculture and Natural Resources at University of California

Agriculture and Natural Resources at the University of California documents the long history of the University of California as a land-grant university that has provided scientific assistance and technology for the Golden State’s agricultural community and citizens in a system past UC President Robert Dynes described as the “R, D & D” model (Research, Development, and Delivery).

By 2008 the University of California’s Division of Agriculture and Natural Resources included cooperative programs with Extension staff consisting of county-based farm advisors and campus-based specialists, administrators, staff, and scientists. At the time of the project’s inception over 200 living retirees from ANR provided a wealth of institutional memory. Most of these men and women had made positive contributions to the betterment of California agriculture and the environment and held valuable historic information necessary for future program development and policy decisions. In a collaboration bringing together the Bancroft Library’s Oral History Center (then the Regional Oral History Office) and the UC Office of the President this oral history project began.

OHC interviewers conducted video interviews with many of the retirees and all interviews were transcribed, lightly edited, web mounted, and archived at the Bancroft Library. These narrative stories illuminated the work and accomplishments of men and women who have given so much professionally and personally to the betterment of American agricultural science, technology, economics, farmer training, education, and labor relations for a sustainable agricultural economic future for California. The story is one of university, field workers, interested citizens, and agricultural business people coming together to improve life for the citizens of California. These interviewed retirees have managed to combine academic training and research and deliver it to “real world” problem-solving. In doing so, they applied science-based knowledge to real life problems and delivered solutions and skills for application by citizens and farmers. This process of taking the university directly to the people is a unique occurrence in the university world. 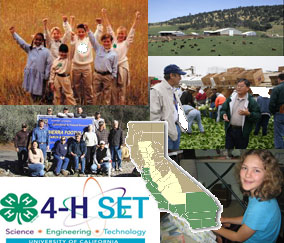 The Agriculture and Natural Resources Oral History Project was a five-year project begun in 2007 and funded through donations to the University of California Office of the President. Although funded by individual donors, this project was planned and executed as an independent scholarly research project; individual interviewees were covered by UC Berkeley Committee for the Protection of Human Subjects guidelines that provide for sealing portions of interview transcripts at the discretion of the interviewee. While the research design and interviewing are independent of individual donors and the University of California Office of the President, we have been assisted by their staff and an advisory committee in identifying research themes, and in selecting and locating potential interviewees.

History of a “Unique System:” California Exceptionalism
As part of the project, interviewers will attempt to set up a contextualized history of ANR over the latter half of the 20th century. The emphasis will be directed toward defining how and why the UC California experience and programs are different than and cutting edge compared to programs in most states. What has made California unique and exceptional?

“Bringing Agricultural Science to the People”
As farm advisors, farmers, County Directors, Specialists, labor organizations, program representatives, office staff, home economists, area advisors, and scientists took their research, technology, programs and expertise to service recipients, how successful were they in meeting the needs of the intended audience? Did they have a mission capable of delivering what the people wanted and how well did they predict future needs? Did they build relationships with individuals in the communities they served and, in many cases, lived?

“Responding to Crisis”
As in all things human, we can never predict all that we need and plan effectively for man-made or natural disasters. Has ANR been able to effectively accommodate the crisis needs of farmers, agricultural businesses, farm laborers, the environment, sudden shifts in government budgets and policy, pests and diseases, safety, and education?

“Public and Private Partnerships”
Like most federal government departments and organizations the ANR navigated the sometimes widely divergent needs of businesses and weighed them against the concerns and desires of politicians and consumers. As 19th-century populism turned into 20th-century progressivism, politicians designed government programs to simultaneously regulate and provide opportunity for large corporations. Yet siding-up to businesses, with money and political clout, sometimes harmed relationships with workers, consumers, and other groups. This uneasy relationship grew as New Deal programs of financial, trade, and infrastructure support for agribusiness continued into the latter-half of this century. For this project, it is necessary to ascertain how the organization negotiated value judgments to develop and proceed on projects. Was it a matter of business money buying political clout? Or in more recent times, those with the best lobbyists? What voice did individual citizens and grassroots organizations have in the policy process? Like most social issues, the answers are not simple and lie somewhere in the gray area of compromise and expediency.

The Cooperative Extension Service system was created by the U.S. Congress out of concern for providing a broader education for the average citizen. In 1862, Congress passed the Morrill Act, which provided for a university in each state to provide education to citizens in agricultural and mechanical fields and these colleges are known today as "Land-Grant Universities." Congress soon realized that to be effective, the educational function of land-grant universities needed to be supplemented with research capabilities and passed the Hatch Act in 1887 to provide for the establishment of research farms where universities could conduct research into agricultural, mechanical, and related problems faced by rural citizens. Congress passed the Smith Lever Act in 1914. This act provided for the establishment of the Cooperative Extension Service.

Once the South left the Union, the remaining northern states began passing a number of measures which the South had blocked prior to 1860. Many of these laws, such as the authorization of the transcontinental railroads, helped to spur on economic growth and expansion in the western territories. In 1862 Congress passed two such measures. The first being the Homestead Act that permitted any citizen, or any person who intended to become a citizen, to receive 160 acres of public land, and then to purchase it at a nominal fee after living on the land for five years. The Homestead Act provided the most generous terms of any land act in American history to enable people to settle and own their own farms. Just as important was the Morrill Act of that year, which made it possible for the new western states to establish colleges for their citizens to fulfill the central tenet that basic education was central to creation of the American democratic process. By the 1860s, as higher education became more accessible many politicians and educators wanted to make it possible for all young Americans to receive some sort of advanced education.

Sponsored by Congressman Justin Morrill of Vermont, who had been pressing for it since 1857, the Morrill Act gave every state that had remained in the Union, a grant of 30,000 acres of public land for every member of its congressional delegation. Since under the Constitution every state had at least two senators and one representative, even the smallest state received 90,000 acres. The states were to sell this land and use the proceeds to establish colleges in engineering, agriculture and military science. Over seventy "land grant" colleges, as they came to be known, were established under the original Morrill Act; a second act in 1890 extended the land grant provisions to the sixteen southern states. The importance of the land grant colleges cannot be exaggerated. Although originally started as agricultural and technical schools, many of them grew, with additional state aid, into large public universities which over the years have educated millions of American citizens who otherwise might not have been able to afford college.

The Hatch Act of 1887 established agricultural experiment stations in connection with the colleges established by the Morrill Act and was supported by the Adams Act of 1906, the Purnell Act of 1925, the Bankhead-Jones Act of 1935. The original Act defined the term "State agricultural experiment station" to be a body under the direction of the college or university or agricultural departments of the college or university in each State. Congress intended the Act to promote the efficient production, marketing, distribution, and utilization of products of the farm for the health and welfare of Americans and to promote a sound and prosperous agriculture and rural life style. It is also the intent of Congress to assure agriculture a position in research equal to that of industry, which will aid in maintaining an equitable balance between agriculture and other segments of the economy.

The 1914 Smith-Lever Act established the Cooperative Extension as a partnership of the U.S. Department of Agriculture and the land-grant universities authorized by the Federal Morrill Acts of 1862 and 1890. Legislation in the various States enabled local governments or organized groups to become a third legal partner in this education endeavor. Today, this educational system includes professionals in each of America's 1862 land-grant universities (in the 50 States, Puerto Rico, the Virgin Islands, Guam, Northern Marianas, American Samoa, Micronesia, and the District of Columbia) and in the Tuskegee University and sixteen 1890 land-grant universities.

Gardner, Bruce. American Agriculture in the Twentieth Century: How It Flourished and What It Cost. Cambridge: Harvard University Press, 2002.

________. Science and Service: A History of the Land-Grant University and Agriculture in California. Berkeley: University of California Press, 1995.

Surls, Rachel. “The Road to Smith-Lever: Agricultural Extension from 1785 to 1918.” Paper for Claremont Graduate University.

True, A.C. “The Services of American Agricultural Colleges.” Annals of the American Academy of Political and Social Sciences 117, The Agricultural Situation in the United States (Jan., 1925): 88-93.

College of Agricultural and Environmental Sciences at University of California, Davis