It’s an occasion worthy of celebration — with a side of activism.

Fifty years ago, on June 23, 1972, President Richard Nixon signed Title IX into law, banning sex-based discrimination in federally funded schools. Among its far-reaching effects, the law ushered in a new era for girls and women in sports — a group that had too often been sidelined in school athletics, even as opportunities for men abounded.

On Thursday in Morrison Library, a panel of luminaries came together for a friendly and intimate, joyful yet sober discussion called “Title IX at 50: Looking Back, Looking Forward.” During the talk, the panelists — authors Lucy Jane Bledsoe and Bonnie J. Morris; WNBA All-Star and Cal basketball alum Layshia Clarendon; and student filmmaker Maddi Wong — reflected upon the law’s legacy, and the work that remains.

“I thought it was fabulous,” said attendee Peggy Guare, a former student-athlete at an all-girls Catholic school, of the talk. “There’s nothing better than hearing people’s stories live, in person.”

Guare, who was drawn to the event in part because of her connections to sports and the work of Bledsoe and Morris, said she was delighted to hear from the panelists who had grown up in the post-Title IX era, and who were carrying forward the push for equality.

“It’s a real treat to see the next generation and hear from them about their experiences, and their struggles,” she said. 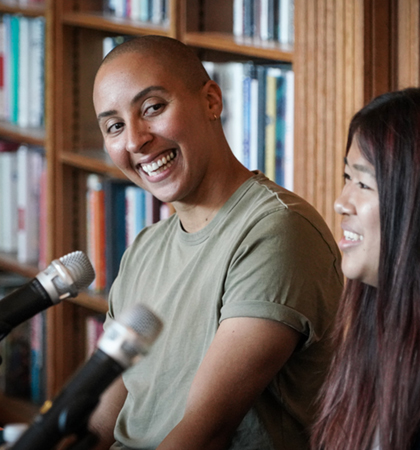 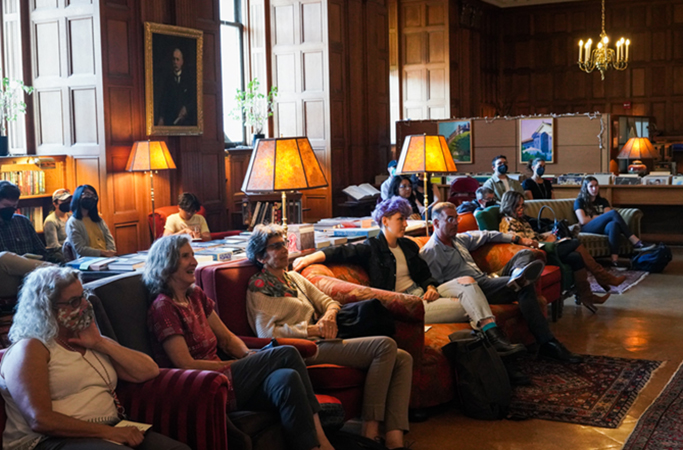 Here are three things we learned from the talk.

1. Title IX was a milestone for progress. But the fight is far from over.

Title IX was something of a tidal shift. But the law comes with its own limitations in scope and impact, leaving cracks where inequality can take root.

The U.S. Constitution doesn’t include any explicit protection against sex-based discrimination on the basis of sex, said Bledsoe, who authored the recently released, “heavily autobiographical” novel No Stopping Us Now, a story of “basketball, love, sisterhood, and activism.” The 19th Amendment, granting women the right to vote, was passed only 100 years ago. And the Equal Rights Amendment was written 100 years ago and hasn’t passed yet.

An attempt by the Biden Administration to expand Title IX has been met with fierce pushback. And one day after the proposal was announced, the Supreme Court struck down Roe v. Wade, erasing hard-fought gains by the movement for abortion rights, a blow to women and people who can bear children.

In short, “Title IX has a lot of heavy lifting to do,” said Bledsoe, a Cal alum and former student-athlete.

As written, the law is limited by its focus on schools that accept federal funding: “Title IX ends when you graduate,” noted Morris, who teaches the popular Sports and Gender course at UC Berkeley and recently authored the book What’s the Score? Twenty-Five Years of Teaching Women’s Sports History.

After college, women athletes might face a drop-off in resources, including having to practice in less-than-ideal facilities — a high school gym with no showers, for example.

When COVID-19 forced college basketball into “the bubble,” women players were deprived of the same ample amenities that the men’s teams received, noted Wong, whose documentary i am woman shines light on the experiences of Cal women athletes and sports professionals.

This disparity, along with other issues, from the unfair burden of social expectations faced by women athletes to the need for more women in administrative positions in the industry, underscores the importance of continued action.

“There’s still so much room for growth and progress that has to be made,” Wong said.

2. That story about Bill Clinton.

In 1995 — 23 years after Title IX had passed — Morris, then a women’s studies professor at George Washington University, attended a double-header basketball game, with the men’s and women’s teams scheduled to play. Bill Clinton and his daughter, Chelsea, were in attendance. The men’s team played first, notching a victory. Then, shortly after the women’s team took the court, the president got up to leave, Morris said. That’s when Morris stepped in, making her way to Clinton.

“I … put my hand out and said, ‘Hi, Mr. President,’” Morris recounted. “I’m a women’s studies professor here, and I’d like to ask you to stay and watch the women play. Don’t leave now that the men have played. It would be meaningful to all of us, and your daughter here, if you would show your support for Title IX law and American women by cheering on the women’s team, which actually has a better record than the men’s.

As Morris recalls, Clinton responded by stating he had a meeting at the White House at 3 o’clock. Morris glanced at the clock and suggested he stay for the first five minutes. Clinton took his seat, apparently heeding her request.

“So I gave a direct order to the president of the United States,” Morris quipped.

For Clarendon, the WNBA, and the game of basketball, has offered acceptance, and room for self-expression.

“I always had freedom in my gender in basketball, in sports,” said Clarendon, the league’s first openly transgender and nonbinary player. “As someone who is masc presenting, I could always wear sweatpants. It was acceptable to my parents. I always knew there were queer athletes, even before we knew the word ‘queer.’”

Yes, Clarendon has experienced homophobia as an athlete. But through sports, they have also been introduced to a supportive, inclusive community.

“(Basketball) saved my life in so many ways.”