You could call it a return to form.

UC Berkeley’s esteemed Lunch Poems series, which had sheltered online for two years of the pandemic, kicked off its 2022-23 slate yesterday with an in-person reading in Morrison Library.

Alex Dimitrov, the author of three books of poetry and one of the voices behind the popular Astro Poets Twitter account, engaged the crowd of more than 100 enthusiastic listeners with selections from his latest collection Love and Other Poems. His easy humor and finger-on-the-pulse perspective on modern life shined through his work, as well as the musings he shared between poems.

“Someone said this book was optimistic when it came out, and I thought that was a very kind of post-Covid reaction to it,” he said, eliciting laughter from the audience. “It’s nice though, ya know. I’m happy if people feel good reading these poems. In fact, I kind of wanted to design them, for the first time, so people would perhaps feel good instead of bad.”

Dimitrov’s conversational style, and talent for gracefully blending light-hearted and existential themes, were on full display in the Frank O’Hara-inspired poem, titled Having a Diet Coke With You, which begins:

Having a Diet Coke with you
is even better than a regular Coke
because in New York the streets are so skinny
I’m always worried about my hair
walking down Lex in the morning
or if we’ll ever get universal healthcare
and I can be assured I’m dying
in all the regular ways—nothing unusual!— …

Although Dimitrov deadpanned in one poem that he had never won any grants for his work, his list of publications is staggering. His work has appeared in The New Yorker, The New York Times, The Paris Review, and Poetry.

In his introductory remarks, Noah Warren, the interim director of the Lunch Poems series, said Dimitrov has “developed a voice on the page that’s vivid and pressing … like no other poet writing today.”

“He asks us to double our lived experience, and our pleasure, with our experience of the poem,” Warren said. “He writes from a cab, many cabs, and makes sure we know how real those journeys are, even as they become a metaphysical state.” 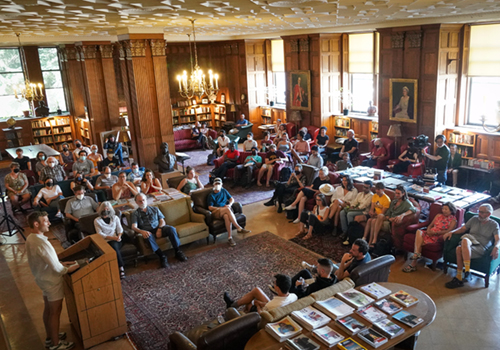 Top to bottom: Left to right: Dimitrov chats with audience members after the reading; Morrison Library was packed for the midday event.

Elizabeth Shehter, a recent UC Berkeley graduate, made the trip to campus to hear Dimitrov read — and to get a well-worn copy of the poet’s book signed. Shehter admires how “real” Dimitrov’s work feels.

“He shows this kind of everyday beauty in life … and the vibrancy of living,” Shehter said. “But in a very human — maybe others would consider it mundane — way. But it’s not.”

The Lunch Poems series has hosted some of the most celebrated voices in poetry for three decades. Robert Hass, professor emeritus of English, helped found the program in 1995. For the past six years, Geoffrey G. O’Brien, professor of English, has directed the series, with Warren helping coordinate the events for the most recent three years. Warren, who is a graduate student of English at UC Berkeley, is serving as interim director for this academic year.

Warren is particularly proud of this year’s lineup, which includes Jake Skeets, an American Book Award winner; Safiya Sinclair, a Whiting Award winner; and Louise Glück, who took home the Nobel Prize in Literature in 2020, among others.

“These are poets from a number of places in their careers, speaking from a number of different positionalities,” he said. “And, of course, that’s one of the main goals of a series like this, to just really highlight the amazing range of styles, perspectives, takes, on the contemporary moment.”

Warren also expressed excitement about returning to in-person gatherings. He said that while the online events of the past two years drew spectators from around the world, they lacked the social quality that is at the heart of the series. He called Morrison Library one of the programs’ greatest assets, listing its many charming attributes as reasons that the series continues to attract a broad audience — even those who are not already engaged in poetry.

“The goal for the series is really to … encourage casual listeners, casual readers of poetry,” he said, “to kind of sink a little deeper and, at the very least, to hear something that surprises and delights for an hour once a month.”

The Lunch Poems series, founded by Professor Robert Hass, is supported by Dr. and Mrs. Tom Colby, the UC Berkeley Library, the Morrison Library Fund, the Arts Research Center, the UC Berkeley English Department, the Dean’s Office of the College of Letters and Science, and Poets & Writers Inc.