While exploring the archives at the Ethnic Studies Library for an exhibit marking the 50th anniversary of the Third World Liberation Front strike in Berkeley, Harvey Dong ran across an image that caught his eye.

“I think it could be an iconic image of solidarity,” says Dong, who participated in the strike as a student in 1969.

The photograph is just one piece of the puzzle filling Doe Library’s Brown Gallery, casting light on the movement that ultimately birthed Berkeley’s departments of ethnic studies and African American studies. These departments were among the first of their kind, and have served as models for programs like them across the country. Whose University?: The 50th Anniversary of the UC Berkeley Third World Liberation Front Strike, which opened in March, explores the movement and its reverberations through time. 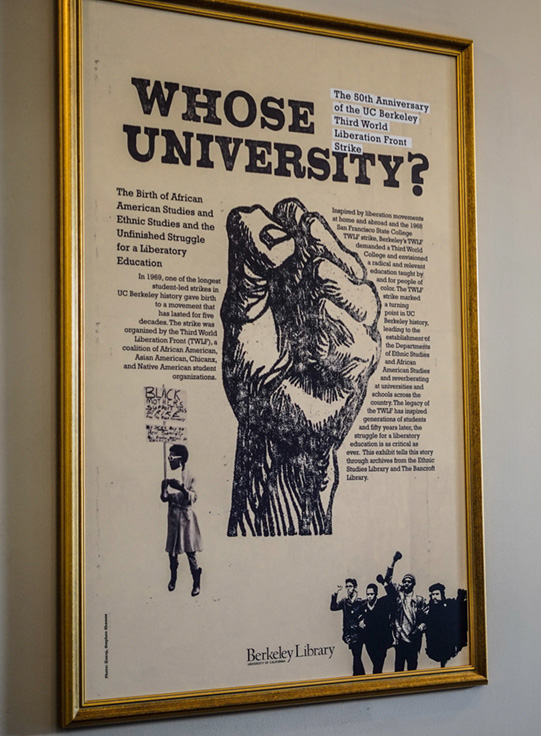 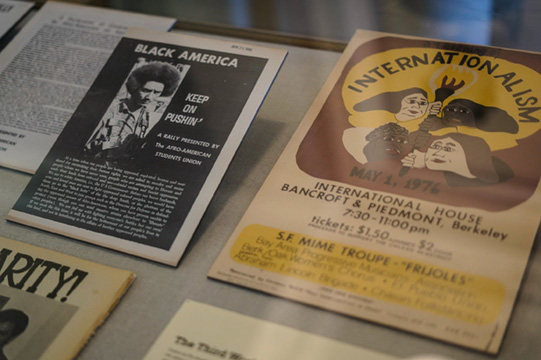 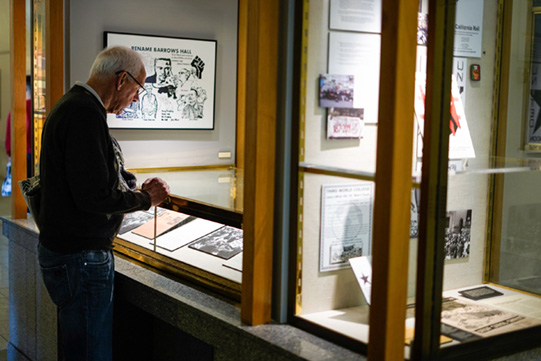 Top to bottom: Clockwise from left: The Library’s exhibit marking the 50th anniversary of the Third World Liberation Front strike at UC Berkeley includes historical pamphlets, flyers, posters, and photographs; a visitor looks at items in the exhibit, which will be in Brown Gallery until Aug. 31, 2019. (Photos by J. Pierre Carrillo for the UC Berkeley Library)

The exhibit not only evokes memories of the strike, but also connects the movement with themes that are still relevant today, from the fight for inclusion on college campuses to the struggle against police brutality.

“The larger point of the exhibit is to not just historicize past events, but to show what could happen moving forward — to get your mind thinking about ways we can address the issues,” says Nathaniel Moore, archivist at the Ethnic Studies Library and one of the lead curators of the exhibit.

Taking up the cause

Growing up in Sacramento, Harvey Dong was all but certain he would join the military. His father was a GI during World War II, and he had uncles and cousins who had served.

As a student at Berkeley in the late ’60s, Dong signed up for the Army ROTC — and a life of waking up at 5 a.m., marching, shining his shoes, and shooting and taking apart rifles, as Dong recounted in an interview with the The Bancroft Library’s Oral History Center.

But on the Berkeley campus, action and activism were in the air. Conversation swirled across campus and through dormitory halls about the Vietnam War, and whether the United States should be involved.

Some evenings, Dong would hunker down at Cody’s Bookstore, on Telegraph Avenue around the corner from his Unit 3 dorm. He filled his head with information about the ever-present, and increasingly polarizing, conflict.

Dong quit the ROTC and plunged into activism. By 1967, the year after he arrived in Berkeley, he participated in his first anti-war march. A year later, in October, he joined the newly founded Asian American Political Alliance, or AAPA.

On Jan. 21, 1969, the Third World Liberation Front strike started on the Berkeley campus, a couple of months after it started across the bay, at San Francisco State.

The AAPA, of which Dong was now a member, was one of four student groups — along with the Afro-American Students Union, the Mexican-American Student Confederation, and Native American Student Union — that joined forces as the Third World Liberation Front. The coalition called for an antidote to the university’s Eurocentric education through the creation of a Third World College, with classes envisioned — and taught — by people of color.

What started as relatively small picket lines at campus entrances quickly expanded into huge, serpentine bands of marchers — and a heavy response by law enforcement, leading to confrontations and arrests. Campus administration and law enforcement officials urged Gov. Ronald Reagan to issue a state of emergency. The National Guard descended on Berkeley. The campus became a battlefield of mace, bricks, and tear gas.

When: The exhibit runs through Aug. 31; the gallery is open during Doe Library business hours. A reception will be held April 24.​​​​

“It was very disruptive,” Dong says. But, he adds, “I think it brought a lot of people to our side.”

Finally, on March 4, the Academic Senate voted 550-4 in support of an interim Department of Ethnic Studies. On March 7, Charles Hitch, president of the University of California, gave the department the green light for the fall quarter of 1969. (African American studies, originally part of ethnic studies, would go on to become its own department.)

Although the department wasn’t the college the strikers had hoped for, it was history-making: It was the first program of its kind in the country, becoming a model for others like it. At Berkeley, and campuses across the nation, it would change how history is told.

‘The need for education’

Although often eclipsed on the Berkeley campus in conversation and in fanfare by the earlier Free Speech Movement, Berkeley’s Third World Liberation Front strike stands apart because for its spirit of solidarity embraced by participants and its length. (It lasted nearly two months.)

The Library’s exhibit marking the 50th anniversary of the strike features historical photographs; newspapers and pamphlets distributed by the Third World Liberation Front; posters; materials that shed light on the history of the Ethnic Studies Library; and audio recordings from the strike from the H.K. Yuen Social Movement Archive. The exhibit also explores echoes of the movement, including the 1999 Third World Liberation Front strike, which emerged when ethnic studies at UC Berkeley was shrinking, with faculty retiring and classes disappearing. 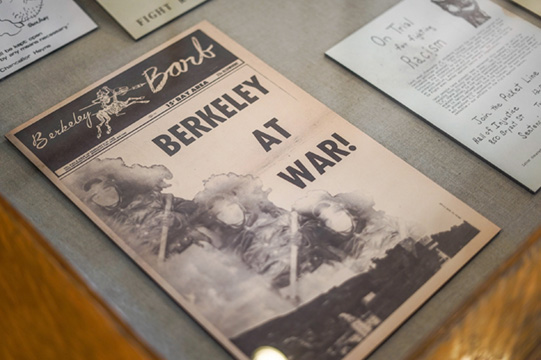 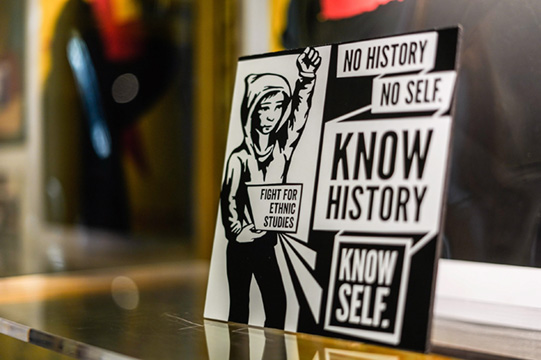 Top to bottom: Left to right: The exhibit includes historical materials, including newspaper clippings, as well as materials from the renewed Third World Liberation Front strike, which came about in the late 1990s as ethnic studies at UC Berkeley was at a low point. (Photos by J. Pierre Carrillo for the UC Berkeley Library)

Sine Hwang Jensen, the campus’s Asian American studies and comparative ethnic studies librarian, and a lead curator of the exhibit, hopes the show will inform people about the movement and help them see themselves as participants in history, instead of as bystanders.

“I hope people feel inspired — not only to take up the mantle of (the Third World Liberation Front), but to join the struggle and fight for a better world,” she says.

Fifty years later, the legacy of the strike lives on, but the struggle continues. With the ongoing scourge of poverty and oppression, an inclusive education is as essential now as it has ever been, Dong says.

“The anti-immigrant sentiments, the anti-Muslim sentiments, homophobia — all of those things show the need for education, the need for students to go back and return to their communities and become leaders in teaching about these issues,” he says.

In 2002, Dong completed his Ph.D. in ethnic studies — a feat that would be impossible if not for the work of he and his fellow activists. He now teaches in UC Berkeley’s Department of Ethnic Studies. (He taught a section of one of the original courses in the nascent department; coming back for his Ph.D. and to teach in the department “was a full circle moment,” he says.)

Dong, who recently spoke at a rally commemorating the birth of the Department of Ethnic Studies, recalls a recent interaction with one of his students, an international student from Asia. The student, he says, was amazed while learning about the Third World Liberation Front strike and the uncommon unity the movement encapsulated.

“He never imagined something like this could happen,” Dong says. “Because history has a lot of things about division and racial divide, and this would be an example of racial solidarity.”

A three-day conference, called Seeds of Resistance, Flowers of Liberation: Voices From 50 Years of Student of Color Activism at UC Berkeley, kicks off April 24 with the exhibit reception. Learn more about the Ethnic Studies Library and its work to preserve the history of the TWLF.