Blackface has resurged in the internet age. And you might be part of the problem. 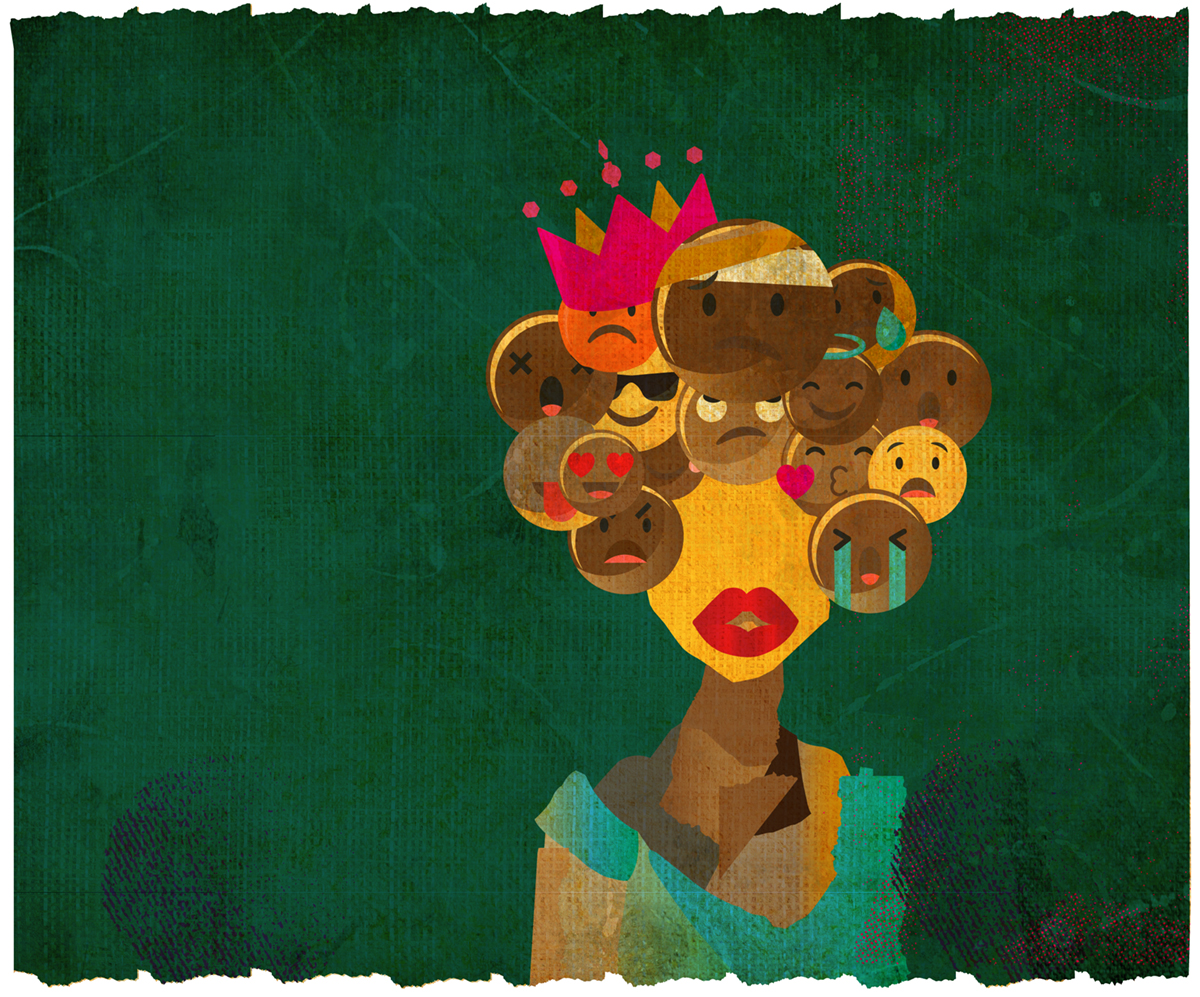 You’ve probably seen it before.

In fact, if you spend any time on social media, it can seem impossible to avoid, tucked between inspirational quotes on your timeline or infinitely looping in a stream of reaction tweets to the trending topic du jour.

Most troubling of all, you may not have noticed it. Erinn Wong ’21 had seen it before, too. But it wasn’t until 2017, while watching a New York Times Snapchat video, that she discovered it had a name: “digital blackface.”

In recent years, digital blackface has become a far-reaching phenomenon, described as a type of minstrelsy for the internet age. It comes in many forms, from turns of phrase in Snapchat Bitmojis to bite-sized TikToks to memes and GIFs. Tons of memes and GIFs. You know the ones: Michael Jordan, cheeks stained with tears. Oprah Winfrey, arms outstretched in excitement. Nick Young, shooting the camera a quizzical look, question marks framing his face.

“It just stuck with me,” Wong says on a Zoom call during a recent summer weekend, recalling her first brush with the concept. “It was … something I couldn’t unsee.”

And Wong didn’t avert her eyes. Instead, she immersed herself in the subject, penning a paper as a freshman at UC Berkeley called “Digital Blackface: How 21st Century Internet Language Reinforces Racism.”

The project not only earned Wong a Library Prize honorable mention in 2019, it has also garnered a big audience, popping up in venues across the internet, from academic papers to Yahoo News. With any luck, Wong hopes her project will raise awareness about the practice, which so often goes unnoticed — and will inspire people to think before they share

Blackface in the internet age

Wong is quick to point out that she didn’t come up with the term “digital blackface,” nor was she the first person to identify it.

In fact, the term “digital blackface” was popularized by Lauren Michele Jackson, a feminist writer who teaches in the departments of English and African American studies at Northwestern University, gaining wide prominence with the publication of a seminal (and viral) Teen Vogue article in 2017.

“She said, ‘What would you think about a research project on digital blackface?’” Acevedo Butcher recalls. “And something in me went click. I said, ‘Erinn, that could be amazing.’”

The problem, as Acevedo Butcher saw it, was the dearth of materials on the topic, which was still relatively unknown. But she knew Wong was up for the challenge.

While researching her topic, Wong turned to course texts, news articles, a meme database, and, of course, social media. She also consulted the Library of Congress and the National Black Archives, and searched for peer-reviewed journal articles on blackface and cultural appropriation on the UC Berkeley Library’s website. “The (Library’s) digital resources are so helpful,” Wong says. “Sometimes I wish Control-F was a real thing in real life.”

Every semester, Acevedo Butcher invites librarian Corliss Lee to lead a workshop for her class. Lee teaches students the fundamentals of library research, opening a door to a wealth of information — all in “a magical hour,” Acevedo Butcher says. (Lee also tailor-made a Library research guide for the class.) These days, the workshops are held online, one of the many ways the Library has adapted during the pandemic.

Digging into the nitty-gritty of the research project through both Lee’s workshop and discussions in Acevedo Butcher’s class proved tremendously helpful, says Wong, who is majoring in business and media studies at Berkeley. The workshop, along with a second Library visit Acevedo Butcher arranged for her class, helped make the Library and the research process feel less intimidating, Wong says.

As Wong poured in hours and hours of work, the seed planted in her mind in 2017 began to take root.

In her meticulously sourced and thoughtfully considered paper, Wong contends that people who aren’t Black but lean on expressions and portrayals of Black people to communicate and convey their emotions on the internet co-opt elements of Black culture while, intentionally or not, perpetuating harmful stereotypes.

Digital blackface, Wong writes, “culturally appropriates the language and expressions of black people for entertainment, while dismissing the severity of everyday instances of racism black people encounter, such as police brutality, job discrimination, and educational inequity.”

Wong’s project places digital blackface in historical context as a repackaged form of minstrel blackface, a practice dating back to the early 1800s where white actors, faces caked with makeup, would entertain audiences by playing Black characters in dehumanizing and stereotypical fashion. But unlike its historical antecedent, digital blackface can be easily and quickly shared and re-shared, mixed and remixed, in massive volumes. Like advertising or propaganda, Wong states, digital blackface subtly normalizes these caricatured depictions through its sheer ubiquity.

And further still, memes, GIFs, TikToks, and other examples of digital blackface serve as a form of social currency, bestowing rewards — in the form of likes, retweets, and other digital age dopamine hits — onto those who spread it, while flattening the humanity of those it portrays. For example, a GIF of supermodel-turned-TV-show-host Tyra Banks, eyebrows knitted in anger — “We were all rooting for you!” — doesn’t leave much room for nuance after being plucked from its original context (America’s Next Top Model) and catapulted across the internet.

The paper Wong handed in, Acevedo Butcher says, was “groundbreaking” work. But Wong wasn’t finished yet.

A few months later, Wong came back and said she wanted to expand upon her project. “She revised it so significantly,” says Acevedo Butcher, who wrote a glowing statement to support the reworked project’s consideration for the Library Prize. “I was so proud. … I mean, she really, really ran with it.”

Wong’s work is but one example of the deep dives the Library Prize honors each year.

“While I am happy the Library Prize recognizes student work, I am most happy to know it motivates, sparks, and ignites student interest in exploring the university’s extensive research resources,” says Charlene Conrad Liebau ’60, a Rosston Society member of the Library Board, whose endowment makes the Library Prize possible. “For undergraduates, the University Library provides one of those great research opportunities.”

As with all Library Prize honorees, Wong’s finished paper was deposited into eScholarship, the University of California’s open access repository, where anyone in the world can read it. At first, it was getting a strong and steady audience. There was a bump in viewership in February, Black History Month. And in May, it began to soar to new heights.

As of press time, Wong’s paper has racked up over 7,000 hits and more than 2,000 downloads, peaking in June. In that month alone — a time when protests sparked by the May killing of George Floyd were reaching a fever pitch — the paper received nearly 2,500 hits, more than it had gotten in all the previous months combined.

But the response — the eyeballs and accolades — has left Wong feeling conflicted.

“I wasn’t sure if I really deserve all this credit and attention, because I feel like this could go to someone else,” Wong says. “I know I have such immense privilege even being able to write and critique something like this at a university.”

Yes, Wong did write an award-winning paper on digital blackface. But she’s very clear: It’s not her place to say what digital blackface is and isn’t. She’s not an enforcer, an arbiter, a hall monitor. But she does hope that a heightened awareness will inspire people to pay closer attention to their own online behavior and other facets of life that might go unexamined.

Which could mean taking that extra step to stop and think before reaching for that GIF that seems just right for your tweet, but actually might be part of a harmful trend.

“There are so many other GIFs and memes and ways of speaking you can use to communicate and show love and show your emotions,” Wong says.

The revolution will not be Instagrammed

A lot has changed since the spring of 2018, when Wong first embarked on her project.

First off, a deadly pandemic has forced people across the world inside and apart, and in America it has disproportionately ravaged communities of color. Renewed protests against anti-Black violence have taken the world by storm, fueled by the killings of Ahmaud Arbery, Breonna Taylor, George Floyd, and many others, along with the recent police shooting of Jacob Blake in Kenosha, Wisconsin.

And this has given rise to a different kind of phenomenon.

Take, for example, the outpouring of solidarity unleashed on the internet for #BlackoutTuesday, June 2. Originating in the music industry as #TheShowMustBePaused campaign, created by Atlantic Records marketing directors Brianna Agyemang and Jamila Thomas, the movement quickly took on a life of its own, sweeping across social media platforms, with supporters posting images of black squares en masse.

But this large-scale show of support had real consequences. According to news reports, the glut of black squares, in effect, hijacked hashtags such as #BLM and #BlackLivesMatter, drowning out important information, resources, and conversations. What happened with #BlackoutTuesday is representative, critics say, of a low-effort, high-reward form of taking up cause. Performative activism, as it has been called, is nothing new. But denouncements of the practice are ever-present, with blog posts and opinion pieces describing it as a paperthin form of allyship — and some saying that it’s tantamount to silence.

“I think technology, social media, has the power to organize and educate, but it also has a way of making activism trendy or the cool thing to do,” Wong says. “I think the more difficult work happens behind the scenes. It’s not Instagrammable, you know?”

For Wong, diversity, equity, and inclusion is a golden thread — one that she strives to weave through all of her work, she says. Right now, she’s leading that charge at the Haas Business School Association (the business school’s undergrad student government), on the heels of finishing up an internship on Adobe’s Talent Management team, where she worked to improve the internal mobility experience. Wong envisions working in diversity, equity, and inclusion in the corporate world one day.

Although she has taken part in work around social justice, she doesn’t call herself an activist, at least for the time being. But she does believe in the ability of activism to change lives. And that can take many forms, whether it’s writing, creating art, organizing, or “putting your body on the line protesting,” she says. The work is sometimes messy and often difficult. And not even the most perfectly crafted tweet or the biggest avalanche of black squares can take its place.

“We need to be actively taking risks with our privilege in order to push this movement for Black people toward liberation further along,” she says.

“And posting a black square?” she adds. “Yeah, you can do that. But I don’t think it stops there.”

Illustration by A. Hamilton

Library acquires FBI records revealing surveillance of Black leaders
Welcome to the UC Berkeley Library! Here’s what you need to know.
Opinion: It has been 400 years since American slavery began. But how far have we actually come?