One foot in front of another — slowly.

Under your feet, a steel girder 6 inches wide juts out from a skyscraper into the void. Leagues beneath you, cars honk vaguely. Arms outstretched, you inch forward.

You remove the virtual reality headset and take a breath. You are safe on campus.

Hight is the external vice president of VR@Berkeley, a student club ushering 150 students into the universe of virtual reality, or VR. The students, hailing from fields such as journalism, music, and cognitive science, are developing cutting-edge technologies that can not only put users in a new world, but give them tools to control their own.

According to Hight, VR@Berkeley is the largest collegiate virtual reality club in the country. The students develop tools for labs and companies across the Bay Area.

But for now, they share only two high-powered computers and a patchwork of meeting spaces scattered across campus. The students teach a VR course every semester, but they recently lost their classroom space.

They have the passion, the people, the ideas — but no place to put them.

Meanwhile, the Library is gearing up for the next stage of Moffitt Library’s transformation into the Center for Connected Learning — a multidisciplinary hub where students can explore new ways of thinking and making. There, the Library aims to build a space for virtual reality — and for the students trying to change the world, a home. 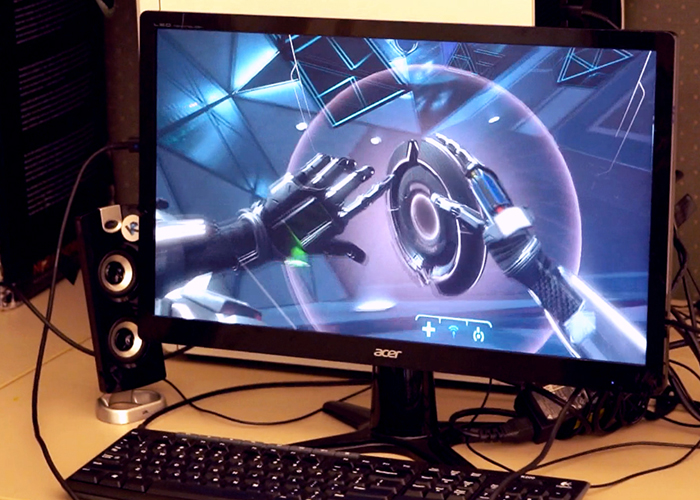 Top to bottom: Left to right: Madison Hight ’18 smiles after demonstrating a virtual reality game; VR games can be fun, but the future of AR/VR is much broader than the gaming industry. (Photos by Jami Smith for the UC Berkeley Library)

In virtual reality, a user wears a headset that hijacks the senses, transporting the person to a new environment. Its sister, augmented reality, or AR, is an offshoot that keeps a person rooted in the real world, but introduces new elements via digital overlay. The two are often called AR/VR.

AR/VR have exploded in recent years. Surgeons can practice procedures and journalists can re-create history in virtual settings. The momentum has inspired a great many challenges, and a horde of students eager to solve them.

“As researchers, we don't even know the full scale of the answer,” says Allen Yang, executive director of Berkeley’s Center for Augmented Cognition. “But students can take a crack at those much bigger problems … and contribute to the larger society.”

For Hight, the driving question is: How do create an experience that can improve people’s lives?

One exciting future for AR/VR is its potential to help treat psychological disorders such as PTSD and phobias. By putting someone in an environment they can safely navigate, Hight says, you empower them to overcome fears or anxieties at their own pace.

Several teams in the club are examining how to combine AR/VR with real-time brain activity to let a person see, and try to control, their stress. In one project, students are building a simulation that visualizes stress — recognized by EEG technology — as a fluid physical object. Hight gives the example of a flower bud: “Here's a flower, and if I calm myself down, I can make the flower bloom.”

“We’re very much on the tip of an iceberg, and we don’t have a complete idea of what the technology can be used for,” says Bryan Tong, president of the club. “There’s still something left to be discovered.”

For John Maccabee, a Library Board member, that’s exactly where the Center for Connected Learning fits in — as a springboard for that kind of discovery.

“These kind of games embody what a library is capable of doing,” says Maccabee, who has been designing games for 12 years and has dabbled in AR/VR. “When I was growing up, it was either books or microforms, and now it’s everything.”

According to Jean Ferguson, learning and research communities librarian, the Library is now working with members of the club to blueprint spaces in Moffitt that can better accommodate AR/VR. The Library currently plans to stock the Center for Connected Learning with a cluster of high-powered computers and a sound booth.

“At the end of the day, what you are doing in a virtual reality environment is just exploring and learning in a new way,” Ferguson says.

With space in the library, VR@Berkeley will have room to explore and learn to no end.

“The capabilities that having a dedicated space would bring and allow us to give back to the school are immeasurable,” Tong says. “That’s our biggest bottleneck, and once that bottleneck is solved, we’ll have so many project teams that can go on and do bigger things.”

Your support will help Moffitt Library as it transforms into the Center for Connected Learning, where students of all levels and disciplines can pursue their passions and interests in a cutting-edge, collaborative space.